8 Early Signs of Alzheimer’s Disease to Be Aware Of 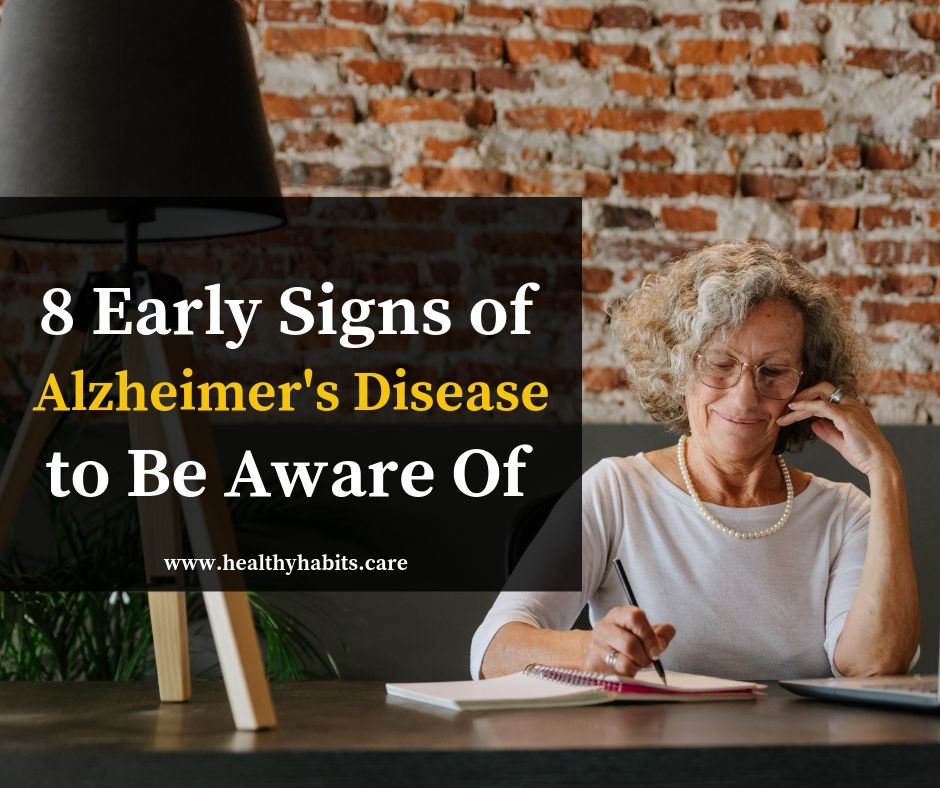 With grim prognoses and very limited treatments for Alzheimer’s disease, early detection hasn’t been particularly advantageous. But that may be changing—fast. One of the hottest areas of Alzheimer’s research involves treating people with early signs of Alzheimer’s with drugs that decrease the production of amyloid beta (proteins that bunch together to form damaging plaques in the brain).

Experts believe that people begin to develop amyloid plaques in their brains at least 10 years before they develop any obvious Alzheimer’s symptoms.

Reisa Sperling, MD, director of the Center for Alzheimer Research and Treatment at Brigham and Women’s Hospital in Boston, is leading a new clinical trial, called the A4 study, that will evaluate patients with evidence of Alzheimer’s damage in the brain but who still have normal thinking and memory function.

The trial will randomly assign groups to receive medication, and researchers will determine over three years whether the drugs affected the patients’ memory or levels of amyloid. “When a person already has a lot of memory trouble, they already have significant neuron loss,” says Dr. Sperling. “We need to find and treat people much earlier.”

Worrying about your memory

Memory issues are one of the more well-known Alzheimer’s symptoms. And a number of studies presented at an Alzheimer’s Association conference last year found that people who were concerned about their own memory and thinking were in fact more likely to have signs of Alzheimer’s plaques in their brain, and develop dementia symptoms later.

“People should trust what they observe about themselves,” Rebecca Amariglio, PhD, a Harvard neuropsychologist, told USA Today. It’s common with a number of health conditions—including arthritis and Parkinson’s disease—for people to feel something isn’t right before others observe it, Frank Jessen, a researcher at the German Center for Neurodegenerative Diseases, told the New York Times.

Forgetting a key conversation with a family member or a big news story from earlier in the week (like a natural disaster such as a hurricane) is concerning—especially if people can’t remember they forgot it.

“If you remember that you forgot something, like your keys, that means your brain is still trying to access that information,” says Dr. Sperling. Not being able to remember the name of an actor in a movie—but recalling it later that night or the next day—is probably not a sign of Alzheimer’s disease.

Not being able to keep track of paying bills, having difficulty transferring money among accounts, or having problems maintaining an adequate balance to cover payments can all be early red flags of Alzheimer’s symptoms, several studies show.

“When I talk to patients in my office, I always ask who pays the bills,” Dr. Sperling says. “If I hear that there’s been a change—say the wife did all the bill paying, but her husband has recently taken over, that’s a concerning find.”

If a loved one or family member who lives alone suddenly begins having trouble paying the bills, you may need to step in. Accounting troubles can set a person up for fraud.

Getting lost while driving

This is especially relevant if the person gets confused or disoriented in a place where they’ve driven many times—for example, if they had to take a slightly different route home from a local store and had trouble getting back to a familiar destination.

“We’ve seen that difficulty following conversations, particularly in a group, can be an early sign of Alzheimer’s,” says Dr. Sperling. She’ll hear patients with early signs of Alzheimer’s report that they don’t like to go out to lunch as much with their friends as they used to because they feel they’re not picking up on the jokes or following the conversation.

Another potential early signal of Alzheimer’s is when people start to lose interest in their favorite pastimes—a golfer or a bridge player who forgoes his weekly game, for example. “Alzheimer’s-related brain changes can cause apathy, which makes people lose motivation,” says Dr. Sperling. These Alzheimer’s symptoms may mimic depression.

“If a patient has never had depression before or has no obvious reason for being depressed, such as grief over the loss of a loved one, that’s concerning,” she adds.

An inability to plan

People in early stages of Alzheimer’s disease have changes in their ability to plan or multitask—a brain skill known as executive function. For example, when someone who is usually the person who plans all the holiday parties or family vacations together begins to have trouble organizing, or even has trouble with day to day schedules, that’s cause for concern.

Nighttime tossing and turning that leaves you exhausted the next morning could be a sign of more than stress. A study in the journal Neurology asked adults who were considered at risk for Alzheimer’s—but who didn’t yet have symptoms—about their sleep habits.

Those who reported worse sleep problems, trouble falling asleep, and more daytime tiredness had more markers for Alzheimer’s disease in their spinal fluid than those who said they slept fine.

The scientists aren’t sure if poor sleep raises risk for Alzheimer’s or if sleep problems are a symptom brought on by the condition, but check with your doctor if your sleepless nights are paired with lapses in memory.