8 Symptoms of Celiac Disease You Need to Pay Attention To 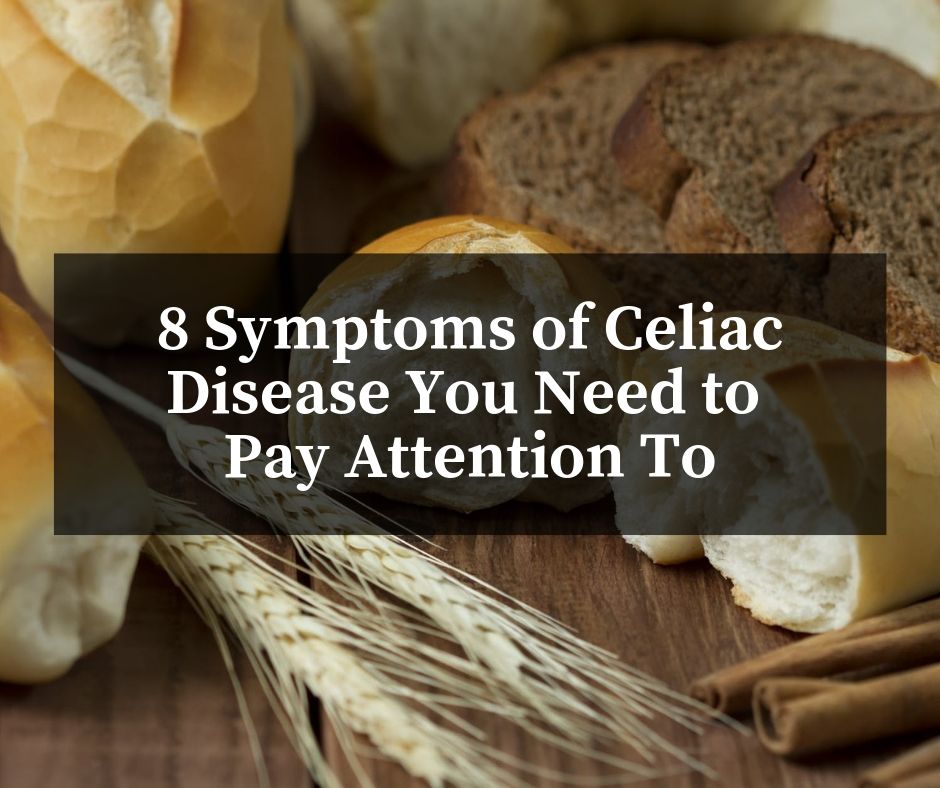 Approximately one in every 100 Americans has celiac disease, a condition in which the gluten in food triggers an immune response that damages the small intestine, which affects its ability to absorb nutrients. While the disease is common, it’s shockingly underdiagnosed—with 85 percent of people with celiac unaware they even have it. That’s not surprising considering that celiac disease affects each person differently.

“Celiac disease symptoms may come on gradually or they may appear suddenly and dramatically,” explains Peter H.R. Green, MD, director of the Celiac Disease Center at Columbia University, in his book Celiac Disease: A Hidden Epidemic. “They may also wax and wane over a long period of time.” Compounding the diagnostic challenge is the fact that there are six “silent” or asymptomatic cases of celiac for each symptomatic one.

Still, since celiac disease puts you at risk for a host of long-term complications, it’s important to get diagnosed and treated—especially because delay of treatment increases your chances of developing another autoimmune disorder (scarily, most patients have symptoms for nine years before they’re diagnosed).

There are more than 200 signs of celiac disease, but it’s most common to have one or more of the following symptoms:

The “classic” celiac disease symptoms may be intestinal problems, but only about one-third of adults with the disease actually experience diarrhea (it’s more common in children because their digestive tracts are shorter and they have less area to compensate for tissue damage). When diarrhea occurs, it tends to show up as stools that are a bit looser (versus very watery stools) and more frequent than usual. It also tends to be a recurring problem.

“’I had five episodes of gastroenteritis last year’ is a common refrain,” notes Dr. Green. There are a myriad of causes of diarrhea: prolonged inflammation of the intestine; poor absorption of dietary sugars and fat, which draw so much water into the colon that the stool remains liquid; lactose intolerance, which results when damage to the intestine destroys the enzymes that digest milk products; and bacterial overgrowth. It’s unclear why, but people with celiac disease have more bacteria in their small intestine than usual, says Dr. Green.

The excess bacteria in the intestine feed on the poorly absorbed nutrients, releasing gas and causing distention, cramps, and increased flatulence. The same malabsorbed nutrients are also responsible for foul-smelling and bulky, greasy stools.

People with celiac disease are more likely to suffer from heartburn. In one double-blind study, 30 percent of celiac patients had moderate to severe gastroesophageal reflux disease (GERD), compared with less than 6 percent of healthy participants. After three months of starting a gluten-free diet, researchers reported a rapid improvement in GERD, with reflux scores comparable to the control subjects.

Anemia in celiac disease can be caused by multiple factors, including deficiency in iron, folate (or folic acid, a B vitamin), and vitamin B12, as well as chronic inflammation. “People suffering from persistent anemia, especially iron-deficiency anemia, where other underlying medical conditions have been ruled out, should ask their doctors about testing for celiac disease,” says Dr. Green.

Fatigue is one of the major celiac disease symptoms. It’s also seen in numerous other medical conditions, which is why many doctors often look elsewhere for a diagnosis. But “extreme fatigue has a true physiological basis as one of the major side effects of celiac disease,” says Dr. Green, who points to malnutrition and the malabsorption of nutrients and intestinal inflammation.

People who are sensitive to gluten can have symptoms anywhere in the body when partially digested gluten fragments leak from the intestine into the bloodstream. “Unlike other proteins, we don’t digest gluten completely,” Alessio Fasano, MD, who directs the Center for Celiac Research at Massachusetts General Hospital in Boston, told the Arthritis Foundation.

“In some people, the immune system sees gluten as the enemy and will unleash weapons to attack it, causing inflammation in the intestines as well as in other organs and tissues.” This can cause serious problems outside the gut, including joint pain.

Since having one autoimmune disease increases the likelihood of having another, rheumatoid arthritis, type 1 diabetes, and other autoimmune disorders should be considered red flags that alert doctors to test for celiac disease, notes the Arthritis Foundation. A few studies have shown that people with Sjogrens syndrome, psoriatic arthritis, and lupus may also have an increased likelihood of having celiac disease.

Osteoporosis, a condition in which bones become weak and brittle, is a complication of untreated celiac disease. The small intestine is responsible for absorbing important nutrients, including calcium, which is essential for building and maintaining healthy bones.

Even people with celiac disease who consume enough calcium are often deficient in this nutrient. Because calcium is needed to keep bones healthy, low bone density is common with celiac—the prevalence of osteoporosis and osteopenia (lower than normal bone density) in newly diagnosed patients may be as high as 75 percent.

Dermatitis herpetiformis (DH) is an intensely itchy, blistering rash that can occur anywhere on the body. Most patients scratch the itchy skin until it breaks or bleeds, so it often looks like a rash with scratches, says Dr. Green, who notes that the physical blisters, continual scratching, and loss of sleep takes a psychological toll on many patients.

Symptoms tend to come and go and the condition is often mistaken for other conditions, such as eczema or herpes, says Jeffrey Weinberg, MD, associate clinical professor of dermatology at Mount Sinai Hospital and a spokesperson for the American Academy of Dermatology.

DH affects up to 25 percent of people with celiac who typically have no digestive symptoms. But since some of these patients will suffer from many of the same malabsorption problems as those who don’t have DH, they still may require treatment from specialists other than the diagnosing dermatologist.