You Should Never Scratch These 6 Itches 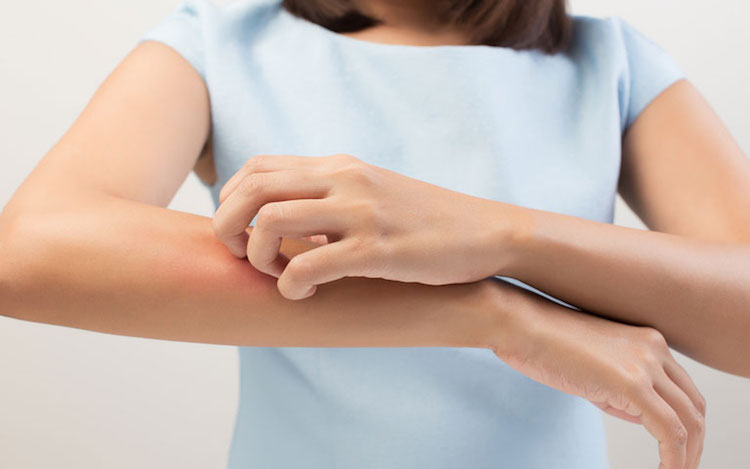 An itch can drive you absolutely crazy, but there are times when scratching only makes it worse—throwing your body’s inflammatory response into high gear.

The most common reason for itching occurs when your skin’s protective outer layer, the stratum corneum, gets parched. Ceramides, special lipids that act as a barrier to your skin (both by keeping hydration in and foreign materials out), are likely in short supply.

Scratching may provide immediate gratification, but it can wreak havoc on your skin’s already-compromised surface layer. “Your skin can form cracks and openings, which in turn can lead to infection,” says Sylvia Hsu, MD, chair of dermatology at Temple University Lewis Katz School of Medicine in Philadelphia.

What’s more, harsh ingredients from detergents or beauty products could seep in and potentially make you allergic to formulations that you weren’t initially allergic to.

Itch fix: Keep showers warm but not hot and seal up hydration in your skin by applying a moisturizing ointment or cream when your skin is still slightly damp.

When a mosquito dines on you, the immune system detects its saliva and launches an attack with a release of histamines—and it’s the latter that is the direct cause of the itching. Another common itch culprit is the chigger, a baby mite found in forests or grassy areas.

Chigger bites release an enzyme into the skin to erode tissue; this causes the skin cells on the periphery to harden and itch. Finally, beware of the fire ant, notorious for attacking unsuspecting picnickers.

A fire ant’s sting releases venom, which in turn triggers the eruption of itchy pus-filled blisters. Don’t scratch! In each case, says Dr. Hsu, “scratching can cause more inflammation.” Making matters worse, any time you nick the skin, bacteria can sneak in, leaving you open to infection.

Itch fix: Chill out with an ice pack on the offending area. Over-the-counter anti-itch creams (like hydrocortisone) can help.

Wounds that are almost (but not quite) healed

Here’s the thing about cuts and scrapes—just as you’re on the mend, the spot in question starts to itch like crazy. It’s part of the inflammatory response, says Brian Kim, MD, co-director at Washington University School of Medicine Center for the Study of Itch, in St. Louis.

But also, “when you break the skin, you also damage the nerves—and as they try to heal, their wires get crossed, which can cause the itching sensation.”

If you scratch, you tear the delicate skin that’s trying to heal itself and you prolong the healing process or worsen scarring. More troubling, your nails house bacteria, which can crawl into the wound and lead to an infection.

Itch fix: Cool sensations can help calm the itch, so try a cooling topical menthol, like the product Sarna.

As if the searing pain of sunburn isn’t punishment enough for failing to use sunblock, the itch sets in—an itch so aggravating, it’s also known as hell’s itch. As with other wounds, a sunburn also sends your body’s inflammatory response into high gear.

While the nerves aren’t outright severed in this case, they do get riled up—which, in turn, leads to that dreadful itching. Scratching could break the skin, slow the healing process, and worsen the itch.

Itch fix: Cool compresses and aloe gels can calm the itch from a sunburn, while cortisone cream helps ease inflammation.

This umbrella term describes dry, rough, inflamed skin. Typically, though, it refers to atopic dermatitis, a condition in which the skin barrier fails to work properly. Whatever the cause, the effect is the same: That patch of skin gets ornery in the presence of certain triggers—fabric, fragrance, airborne allergens—and it goes bonkers with itchiness.

Ignoring it is hard, but relentless scratching will only—you guessed it—make matters worse: in particular, you could end up with something called lichen simplex chronicus. “The skin gets thicker, darker, and more wrinkly,” says Dr. Hsu.

And it feels even itchier and becomes even harder to treat. While this can happen with any sort of itch, it’s especially likely with eczema, when the itch (and therefore the scratching) is chronic. You may also be hit with prurigo nodularis, in which the scratched or picked skin develops into itchy bumps.

Itch fix: Cool compresses and thick hypoallergenic creams can help, but if the itch is too much to bear, see your doctor. She can provide a strong topical steroid (to break through rough skin) and also suggest antihistamines to calm the inflammation and help you sleep at night.

In this condition, an overactive immune system causes the body to produce skin cells in warp speed, so that new cells are pushed to the surface in as little as three days as opposed to the normal 28 to 30.

Because the skin can’t shed fast enough to keep up, dead skin cells, which are red, flaky, and sometimes itchy, pile up. Fight the urge to scratch. “The parts of the epidermis that are above the dilated blood vessels can bleed when the scale is scratched or picked off,” says Dr. Hsu.

Itch fix: As with other itchy conditions, moisturizing helps, but your doctor can also prescribe special psoriasis treatments, including ultraviolet light therapy and prescription medications.