10 Signs of Gum Disease You Should Look Out For 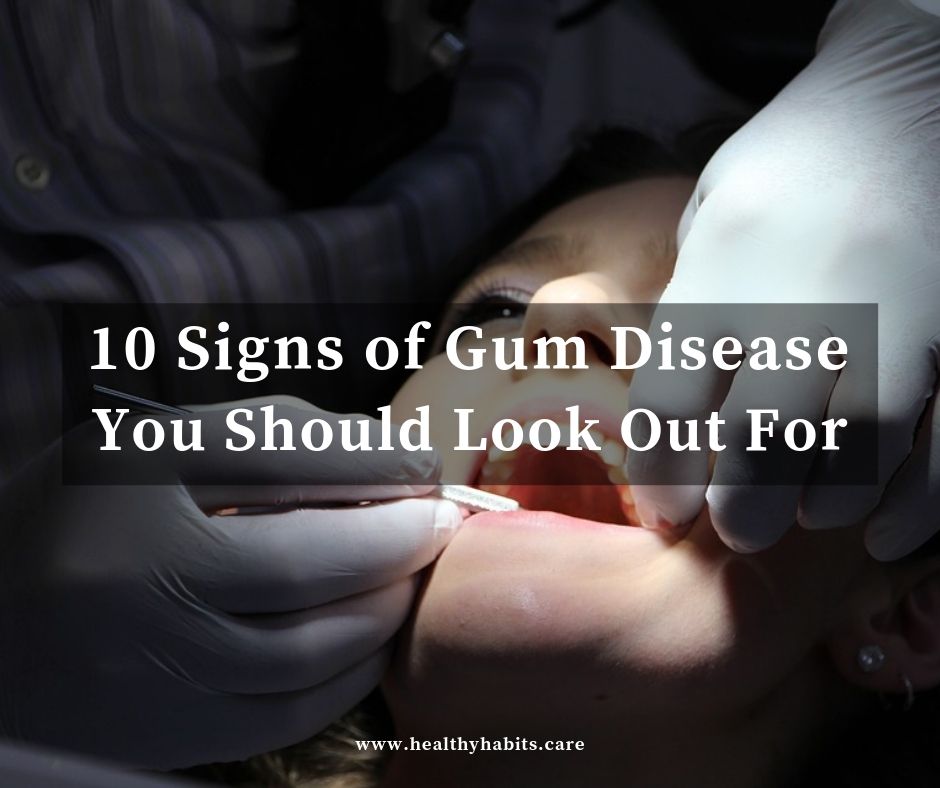 If you suffer from gum disease and need surgery, you may now be able to say goodbye to a mouthful of gauze and stitches post-op. The FDA recently cleared a non-invasive laser treatment that makes surgery for periodontal disease easier and less painful—and it’s used by more than 2,000 dentists nationwide. It’s called the PerioLase MVP-7, and it targets diseased bone and tissue with a tiny laser, killing bacteria to eliminate infection and inflammation. Its powerful laser then seals the gums to create the clean, closed environment necessary to ward off future gum recession and promote gum tissue reattachment.

But how do you know if you have or are at risk for gum disease? The symptoms listed below can be subtle, but it’s important to keep an eye out for them and bring up any teeth or gum changes to your dentist. If left untreated, not only can periodontal disease destroy the tissue that supports the teeth, it can also increase your risk of heart disease.

1. Bleeding from the mouth

Everyone gets bad breath on occasion, but if you’ve never suffered from it before and it doesn’t go away or gets worse, it could be a sign of gum disease, says Vernon. “There’s also a certain scent people notice, almost like alcohol or rotting apples,” he says. When bacteria migrates below the gum tissue where toothbrushes and floss can’t reach it, bad breath can arise.

“Some people notice they have a little space between their teeth that wasn’t there before, or their front teeth might flare forward or backward; those could be signs of gum disease,” says Vernon.

Gums that are red, puffy, or tender could be a sign of gingivitis. It’s important to treat it so it doesn’t advance to periodontitis, a more serious form of gum disease that causes gums to recede from teeth and form pockets that can become infected.

The sticky film that forms on teeth is called plaque (you may notice a white or yellowish substance in between teeth or along the gum line), and it can build up and become tartar (hard, calcified deposits that must be removed by a dentist) without regular brushing and flossing. It also harbors bacteria that can eventually lead to gum disease. “Calcified plaque forms little barnacles above or below the gum line, which must be removed by a dentist,” says Vernon.

If you start experiencing tooth sensitivity, it could mean you’re simply brushing too hard—or, it could be a sign that gum disease has progressed past the mild state. “When gum tissue recedes, it exposes the root of the tooth, which is less hard than the outer enamel, causing sensitivity,” says Vernon.

Loose teeth aren’t so fun when you’re an adult. “If you can feel your teeth move when pushing lightly with your finger or tongue, you’re getting into more severe periodontal disease,” says Vernon.

Just because you’re stressed doesn’t necessarily mean you’re destined to develop gum disease; but according to the American Academy of Periodontology, chronic stress may up your risk for the condition because it makes it harder for the body to fight off infections, including periodontal ones. Consider talking to your dentist if you’re feeling frazzled and also notice other symptoms.

If you grind or clench your teeth—while awake or asleep—you may be upping your risk of developing gum disease. These actions put excessive force on the supporting tissues of the teeth, speeding up the rate at which they may become destroyed.

Studies have shown that smokers have more tartar than non-smokers, a precursor to gum disease. Plus, tobacco products damage teeth and gums, providing an open door for infection-causing bacteria that can lead to gum disease.