10 Signs You Could Have Psoriasis 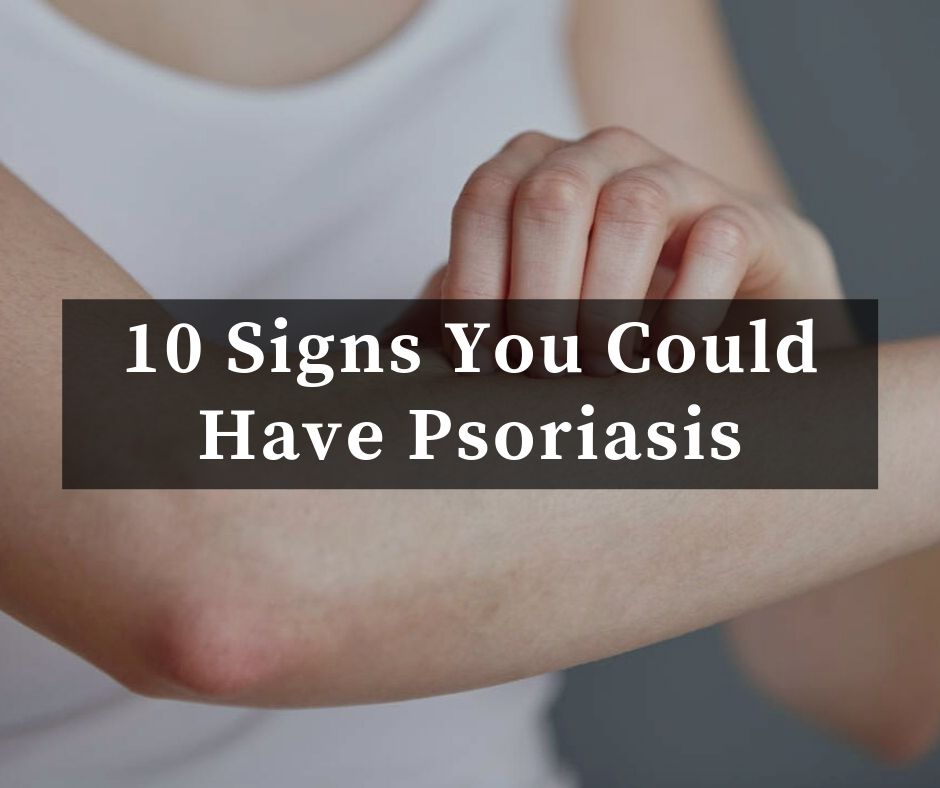 Psoriasis is a disease that kicks skin-cell production into overdrive. New cells surface in a matter of days, instead of weeks, piling up faster than they’re shed. With plaque psoriasis, the most common type of this skin condition, rapid skin-cell renewal creates scaly, raised patches, called plaques, on the skin’s surface.

Psoriasis is an autoimmune disease, meaning the body’s own immune system is somehow tricked into attacking healthy cells. In the case of psoriasis, this process causes the skin to become scaly and inflamed.

Why does this happen? It’s clear that the genes you inherit play a role, since psoriasis tends to run in families. But even if you have a genetic predisposition, it doesn’t mean you will develop the skin condition. Scientists think something in your environment–be it stress, injury, infection, medication, or weather (particularly extremely cold or dry air)–must trigger or worsen symptoms.

Every person’s psoriasis experience is unique, explains Brian Keegan, MD, PhD of Windsor Dermatology and the Psoriasis Treatment Center of Central New Jersey. “Psoriasis can start slow and can even be difficult to diagnose in its early or limited stages or can present full-blown, affecting more than 20% of the body in a few weeks,” he says. There’s “no standard or predictable way” that this skin condition occurs.

Knowing the signs and symptoms of psoriasis in its many forms may help you recognize this common skin disorder. Dr. Keegan urges psoriasis sufferers to start treatment as soon as possible because “ignoring your condition can lead to more serious complications.”

Left untreated, psoriasis may contribute to issues with your heart, liver, blood vessels, and more, he says. Here’s what to look for.

Red, inflamed skin patches are one of the most common signs of psoriasis. Depending on the type of psoriasis you have, your rash can be widespread or limited to certain areas of the body. Plaque psoriasis, which accounts for an estimated 80% to 90% of psoriasis cases, can occur anywhere on the body, Dr. Keegan says.

Sometimes red, scaly plaques pop up on the face, particularly the eyebrows, forehead, hairline, and the area between the nose and upper lip. If you have scalp psoriasis, you may notice red patches, flaking, and even temporary hair loss.

The red rash of plaque psoriasis is usually sheathed in silvery-white “scales,” which are really dead skin cells. The surface layer of scales can easily flake away, but those just beneath tend to cling together. Picking them off or aggressively rubbing them can cause bleeding.

Very parched skin that flakes or cracks and bleeds is another feature of psoriasis. People with scalp psoriasis can have significant flaking. These dry, silvery-white scales differ from flakes of dandruff, which tend to be white or yellowish and greasy.

Itchy skin is a common complaint of psoriasis sufferers. More than just a twinge that makes you scratch, the itch can feel like a biting or burning sensation, according to the National Psoriasis Foundation (NPF).

If you have plaque psoriasis, you might notice the inflamed skin patches appear thicker than healthy skin nearby. Psoriasis also looks thicker than eczema, an allergic skin condition that causes an itchy rash.

Sore, stiff joints–especially when you wake up or after you sit for long periods–may be a sign of psoriatic arthritis, a type of arthritis that commonly affects people with psoriasis. It typically strikes years after someone has already developed psoriasis on their skin, but it can occur alongside or even before skin symptoms.

Nail psoriasis? Yep, it’s a thing. It mostly affects people with psoriatic arthritis, but many folks with skin psoriasis also see changes in their fingernails or toenails. Look for pitting, loosening, or thickening nails, or nails that are ridged, discolored, or splintered. Sometimes the nails look like they’re crumbling.

Small, teardrop-shaped red spots or scaly plaques on the arms, legs, trunk, or scalp are signs of guttate psoriasis. This type of psoriasis primarily affects young adults and children after a bacterial infection, like strep throat. It can clear up on its own or become a chronic problem.

“‘Guttate’ is derived from the Latin word for speckled or drop, which can describe the appearance of the affected skin,” Dr. Keegan explains.

Red, swollen patches of skin covered by small, pus-filled bumps are distinctive features of pustular psoriasis. These painful blisters contain white blood cells and can affect any part of the body, but they usually surface on the palms of the hands or soles of the feet.

There are three types of pustular psoriasis; the most severe, called von Zumbusch pustular psoriasis, can be life-threatening. It can abruptly cause fever, chills, fatigue, severe itching, rapid pulse, loss of appetite, and muscle weakness, and it requires immediate medical attention, according to the NPF.

Inverse psoriasis (also called flexural or intertriginous psoriasis) is an uncommon form of the disease that affects areas of the body with folds of skin. Smooth, red, almost shiny patches of skin develop in the groin, buttock, breast, or armpit areas. Sweating and rubbing can make treating psoriasis in these areas difficult.

Inverse psoriasis is more common in people who are overweight or have deep skin folds, according to the NPF.