8 Surprising Effects Fast Food Has on Your Brain 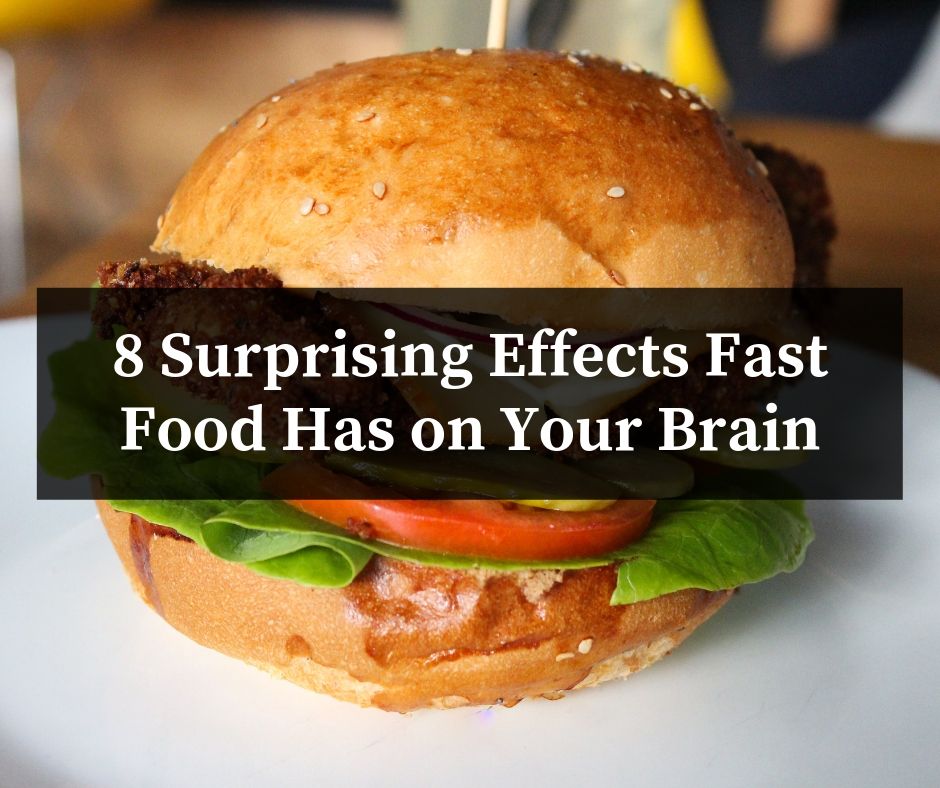 You probably know it can blow up your waistline, but fast food may also have a surprising impact on your mood and mind. Unfortunately, the consequences that these junk food have on your brain are terrible, irrespective of whether you have them once in a while, twice in a week or every day.

In a series of different experiments, Canadian researchers found that merely thinking about fast food can prime people to feel hurried. In another experiment, people who subconsciously viewed fast food logos and then read certain passages rushed through them more quickly than people who weren’t exposed to the logos.

“The way people eat has far-reaching—and often unconscious—influences on behavior and choices unrelated to eating,” the study authors noted.

You may be prone to depression

People who eat a lot of fast food are 51 percent more likely to be depressed than those who steer clear of it, according to a Spanish study. The more burgers, pizza, and fries people ate, the greater their risk.

“But depression may also increase fast food intake. We use the words ‘comfort food’ for a reason.”

You eat too fast, and too much

It’s not the food that makes you eat quickly, research shows; it’s the overall atmosphere when you eat out. Fast food restaurants are designed with speed eating in mind—and studies show the quicker you eat, the more calories you consume.

Bright colors, like yellow and red, are mentally stimulating. Harsh lighting and loud music can also make you race through your meal. In fact, when Cornell researchers gave a Hardee’s restaurant a fine-dining makeover with additions like soft lighting and jazz ballads, people ate almost 200 fewer calories and said they enjoyed their meals more than those who ate in the usual setting.

Your brain gets hooked on sugar

People think fast food is high in calories and fat, but many of us also don’t realize how high in sugar certain fast food meals can be. In fact, it’s often the foods that sound “healthy” that pack the most sweet stuff.

Recent research has indicated high sugar intake can lead to myriad health issues from heart disease to diabetes to obesity. Brain scans also reveal how sugar can be addictive: the more you eat, the more you’re likely to keep craving it.

Your risk of dementia can increase

Eating lots of fatty fast food can increase the amount of insulin produced by your pancreas. While you probably already know that increased insulin production can lead to type 2 diabetes, you may not know that there’s a scary link to dementia as well.

If the brain develops an insulin resistance, its ability to create and store memories could suffer, increasing dementia risk. Researchers at Brown have even called Alzheimer’s “the diabetes of the brain.”

Your learning capabilities may decrease

A study at RMIT University in Australia found that people who consumed lots of fast food performed more poorly on simple memory exercises. Researchers found that fast food and other types of junk food can reduce neuroplasticity, the process that allows our brains to store our experiences as memories.

Your mood could go from bad to worse

While we may be tempted to reach for fatty, greasy foods when we’re feeling down, researchers have revealed that that can actually backfire. Researchers at Penn State assessed how “disordered” eating habits, including eating fast food, affects mood.

While there was no improvement or deterioration in positive moods, participants who already felt down in the dumps reported feeling worse after eating unhealthily. “Comfort food” may not be so comforting after all.